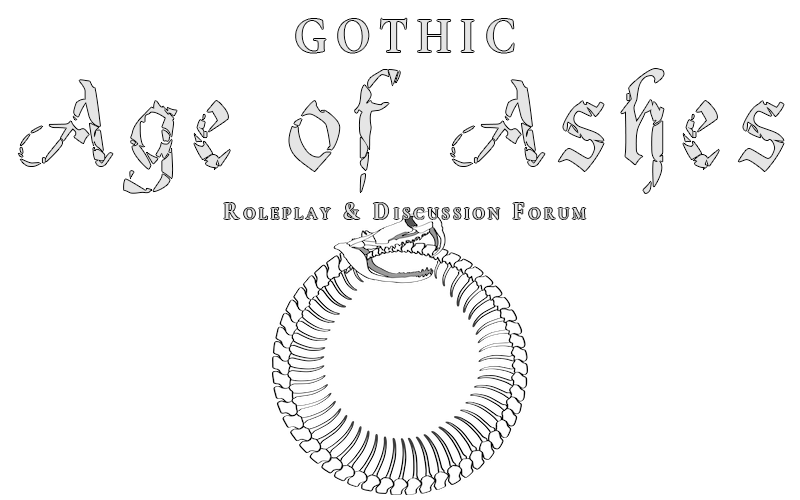 The personal thoughts, soul-searching, mysteries, and musings of your character. These roleplay threads are not invitations for interaction, but backstory pieces or upkeeps of current events--your inner thoughts and dreams.

My first command away from the Fleet, Storm Chaser took on passengers bound for a place called Cenotaph. A place that nobody has been to, but is rumored to be carved of gold and surrounded by fertile fields. Everyone in the expedition seems to have their own hopes for the place… and everyone seems desperate and running from something. It sounds like a good place to find relics and writings to please the Guild, and also keep myself out of the Fleet's sights for a time. Three ships set out in total, Dumah's Promise took the lead, Storm Chaser was the smallest, and we regularly had to trim sail to not outpace the others, and Opportunity, which I have come to learn is a renamed ship captured by the crew.

Seas have been too calm and there's a strange feted smell coming from Dumah's Promise.

What a disaster! Dumah's Promise lead us up-river on what should have been the shortest route to Cenotaph. Against all common sense they entered the mouth upon sight, rather than anchoring and waiting for a favorable tide. People are in such a hurry… under a new moon a horrific storm blew up. Dumah's Promise was lost, cracked upon the rocks at the mouth of the river. Thankfully Storm Chaser was furthest from the coast, so we managed to stay clear of the rocks, but the winds and tide thrashed the sales and cracked the foremast. It will take several days to brace… if it can even be fixed. We went ashore with the lifeboats to look for survivors and find out if the expedition would continue. Only 30 or so survivors made it to shore…. At least at first. Mostly outlanders and Forgotten… a few Seravian… a few Salgothic if you can believe that. Captain Valentine a Dumah's Promise met his final death … and was eaten by local vermin. His Quartermaster swore to continue toward Cenotaph and take the survivors with her… anyone willing to swear their loyalty to a Neimen tribe as guides anyways.

We've taken on crew from the survivors, and a few from Dumah's Promise who couldn't stand being on land. The Captain of the Opportunity and many of her crew decided to try and strike out inland with the others… a Hesha on land… marching for days in the muck… she tried saying it was for adventure… it's likely more because she's afraid of the sea… running from something… Not unsurprising really given what we've seen in the Crescent Isles.

We'll repair the mast and continue by river, sticking to the original plan. With luck we'll beat the caravan to Cenotaph and be waiting for them when they get there… assuming Dominique or the Rats can guide us. We have a hold full of supplies we can trade for guides, and 16 long guns we can use to encourage settlements to give up more if we need. River raiding is dangerous, but so far the only threat to the Storm Chaser is the Opportunity, and she's back out to open sea while her Captain takes a walk around the countryside.

One of the survivors, William, agreed to send message from the caravan back to us aboard ship. Between those, and the Wind, I'll be able to keep an eye on their progress. It's likely to be 4 months before we meet up again though. Better 4 months on deck than knee deep in mud and animal shit though.
Top

Mike had been collecting parts and such for his robots, retiring to the cafe to do some hacking. He had fallen asleep but saw that another source code had sold. He couldnt use them. He wish he had better hacking programs.

He left the cafe, his eyes widened as he saw a group of cops.
http://metrodomos.ru/
Top
Post Reply
2 posts • Page 1 of 1

Jump to
Powered by phpBB™ • Design by PlanetStyles